Cookies help us deliver our services. By using our services you agree to our use of cookies.

OK, got it Learn More 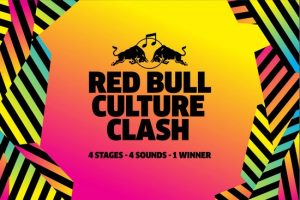 For the record I am a huge Reggae Soundclash fan, which I believe is where the original idea for the Culture Clash was spawned. This was my first live experience of the Red Bull Culture Clash. But having seen previous events online, I had an idea of what to expect.

The Soundclash itself consists of four rounds, 1) Pressure Drop 10 minute, 2) The Selector 15 minutes, 3) Sleeping With The Enemy and 4) Armageddon  2 x 5 minutes.

This event also comes with a long list of rules which probably get broken every step of the way, well what are rules for but to be broken?.

Round one kicked off with ‘Eskimo Dance’ first out of the blocks and they wasted no time by playing grime anthem “Wot Do You Call It?.” They then brought out Chipmunk, Stormzy and Solo 45 to a chorus of “Feed Em To The Lions” at this point I could not see how another crew was going to top this. It was a master stroke in terms of what it did for crowd reaction but not entirely Soundclash material.

‘Mixpak’ was up next and loaded up this round with some well thought out Dub Plates from The Kranium, Beenie Man, Serani, Topcat and Tony Matterhorn.  Good vibes encouraged some nice crowd reactions. Next on stage came ‘Wiz Khalifa and Taylor Gang’, and if I’m honest before the night started I expected that this would be the weakest crew, and they did not fail to disappoint.

First sound to use the video had DJ Khaled dissing sound along with some quite good use of video (I notice that someone forgot to start the timer – minor detail Shaq). They started off well with a Sam Smith dub but went cold in the middle but then they played some decent tunes towards the end, which included Panda change to “Body Them.” For the record they had too many people on the stage and it felt like to many of those people had a mic.

The final sound to play in this round was the ‘UKG All Stars’ and they surprised the crowd with a Eastenders video. Danny Dyer questioning the other sounds rights to be in the clash. This, to me, was a well thought out and executed idea. UKG came out blazing with sound iconic UKG dubs the one that stick’s out in my mind is Little Man, along with a guest appearance from Lisa Mafia.

Amusingly, one of the ‘UKG All Stars’ made a point of reminding Eskimo Dance that this was a clash and not a concert…?

‘Mixpak’ started this round and it was jammed packed with some slick dubs from start to finish, coming from Sneak Bo, Shabba Ranks, Ninjaman, Chaka Demus & Pliers and Shaggy.  Then there was a surprise guest, Spice, who proceeded to come out, jump straight into the splits and call Wiz Khalifa a Pumpum (by the way she did not do this all at the same time).

Popcaan, who performed for the first time in the UK, was ok but at times it felt like he was forced finish up with “Good Times” to which the crowd responded well.

‘Wiz Khalifa and Taylor Gang’ again started with DJ Khaled (ok I’m like couldn’t you get someone else….BORED), surprising they came with some big Dub Plates in this round Junior Gong Marley, Major Lazer Lean On, Barrington Levy ASAP & Shabba just to name a few and now looking back on my notes I’m surprised that they didn’t do better in this round therefore I can only put it down to having some weak MC’s and a bunch of people on stage at the same time. The performance lacked that necessary punch and commanding voice.

The use of video was again mastered by, ‘UKG All Stars’, when they played old footage of Wiley (Eskimo Dance) talking about his love of Garage. They then proceeded to load up with some heavy artillery, ‘Show Me Love’, Flowers, Wretch 32 (best so far), General Levy and Rudimental just to name a few. UKG finished off with a performance by Skibadee and Shabba.

Eskimo Dance member, Wiley, came out and addressed that fact that UKG All Stars sounded a lot like Jungle, thenLethal B came on stage and performed Rari Work Out, Pow and Box (I don’t think that any of these where dub plates and once again they turned their round into a bit of a concert). After this they proceeded to play some big tunes to the crowd went mad, i’m not sure if they were Dubs (I must admit i was slightly lost however I knew “She’s Wants a Man From Brum”

3) Sleeping With The Enemy

Ok, from here on in the detail is going to become a lot less (phew I hear you say).

Wiz Khalifa & Taylor Gang played a few tunes on grime beats, that did not really work.

UKG All Stars came to the stage with some heavy hitting dubs including Ninja man and Dawn Penn.

Eskimo Dance proved that they were not so versatile and still played Grime.

Mixpak used a video for the first time with Grime’s own Big Narsty who then made an appearance on stage with a full head of locks.

MixPak – Drake One Dance (Sealed the round and the cup)

In my opinion the correct sound system won in the end.  However i’m not sure if throughout the night all of the rules had been followed and a stronger host/judging panel maybe needed to enforce these for next years event.

This site uses Akismet to reduce spam. Learn how your comment data is processed.